On November 18th, the Forest Stewardship Council celebrated people and organizations who have demonstrated an enduring commitment to responsible forest management in our annual FSC Leadership Awards at Greenbuild 2015. Read more here.

Collins receives Operator of the Year for Barry Point work.Click here for a video with more info.

The Champions Award is given to FSC partners who represent visionary leadership in advancing FSC's mission and demonstrate outstanding support of and dedication to the work of FSC-US. For more information click here.

The Sequoia Awards, given since 1997, recognize and honor the creativity, quality and innovation of the best new offerings in the woodworking industry. Collins Pine Freeform Particleboard was honored in 2009. Collins FreeForm is a FSC-certified particleboard made from wood waste and melamine-based resin with no added urea-formaldehyde.
For more information click here.

Connie Grenz, general manager at Kane Hardwood, accepted the Chamber award Saturday. She praised the Kane Hardwood, employees. "Every single person is a key to our success," Grenz said. Kane Hardwood, a division of the Collins Companies, has 120 employees and is considered the largest manufacturing employer in the Kane area.Click here to download the article.

Blaine Puller has been chosen to receive the Society of American Foresters' Presidential Field Forester Award. The award recognizes foresters who have displayed uncommon talent and innovative methods to achieve a record of excellence in the application of forest management.Click here to download the article.

For its pioneering commitment to sustainably harvested timber, through three generations of management. See www.business-ethics.com for more info.

For large companies from the Better Business Bureau of Oregon and western Washington.

1999 Exporter of the Year Award

To Jim Quinn, President and CEO of The Colllins Companies from Timber Processingmagazine.

Jim Quinn, president and CEO of The Collins Companies, was honored as the 1998 Alumni of the Year from the John F. Kennedy University School of Management.

1997 Founder of a New Northwest 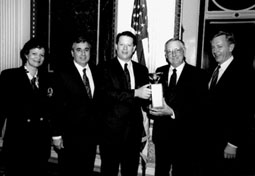 For Sustainable Development, presented at the White House.