Collins Rides Sustainability All The Way To Greenbuild
November 15, 2010
The Collins Companies has just announced that it has commissioned the first 100% FSC-certified bicycle in the nation.

Turn a Beautiful Corner with TruWood Designer Trim
October 28, 2010
Stylish exterior trim is just as important as the details used inside a home.
The Designer line features both channeled and beveled styles...

Today's Homes Call for Distinctive Exterior Details
October 28, 2010
More than ever, curb appeal is what gets homes sold.
All 37 profiles are durable, engineered-wood products. They're made from 100 percent wood that's been engineered to take out all the defects of natural wood-knots and splits...

More Than Just a Beautiful Face
May 15, 2010
TruWood Old MillShingle Siding is split siding made easy.
Ask anyone who has seen the beautiful homes on Cape Cod and they will probably rave about the rustic beauty of those quintessential New England shingle-sided houses.

Building Smart Means Building Fast
May 15, 2010
TruWood offers easy-to-install products and videos to eliminate callbacks.
There isn't a builder out there who hasn't received the dreaded callback. Callbacks are a damaging setback for any company and, while mistakes happen, most callbacks can be avoided.

Steps in the Green Direction
May 15, 2010
TruWood keeps sustainability a top priority.
Being green has certainly become a popular trend. Companies now go to great lengths to advertise their new color.

Collins Pine FreeForm® Now Moisture Resistant
April 20, 2010
Klamath Falls, OR - The Collins Companies continues its pursuit of innovation with its particleboard product line. The newest improvement is that FreeForm now meets the moisture resistant specifications for ANSI MR-10 per the ASTM D 1037-06a for 24 hour water absorption.

Seven Companies Awarded Leadership Award For Product Innovation in Woodworking Industry
July 22, 2009
City of Commerce, CA— The Sequoia Awards, given since 1997, recognize and honor the creativity, quality and innovation of the best new offerings in the woodworking industry.

The Collins Companies committed to reducing their carbon dioxide emissions
May, 2008
Collins becomes the first forest products company in the U.S. to be a signatory to the World Wildlife Fund Climate Savers Tokyo Declaration.


October 19, 2007
Jay Francis of Collins Pine Company is being recognized for his outstanding sustainable forestry management and leadership.


January 11, 2007
A California energy company is going ahead with plans to build a plant in Lakeview that will burn small trees from surrounding forests to produce electricity.


November 2006
Green 50 is a collection of entrepreneurial companies that are showing what it means to run good businesses, attack the most pressing problems of our time--and make serious cash along the way.


September 12, 2006
Portland, OREGON– As a member, Collins Pine Company will work with the Registry to annually track, report and certify the greenhouse gas emissions (GHGs) from its operations.


2003
Portland, OREGON– The Climate Trust of Portland, Ore. is helping The Collins Companies reduce their carbon dioxide emissions, the gas largely responsible for global warming, by partially funding the installation of a cogeneration facility at the Collins Lakeview facility.


November 7, 2002
CHESTER, CALIFORNIA– On March 31, 1943 the first log was cut at the then new Collins Pine Company mill in Chester, California. Annual capacity in 1943 was 50 mmbf and then later increased to 75 mmbf. The new mill, at full production in 2003, will more than double the original capacity to 120 mmbf.


November 16, 2001
WASHINGTON – "The Collins Companies have been a leader in Oregon’s effort towards building a sustainable future," said Oregon Governor John Kitzhaber.


November 6, 2001
MINNEAPOLIS– If capitalism is a symbol of evil in some eyes, it can be a beacon of hope. Take, for example, the movement toward sustainable wood.

Collins Pine to be Honored for Forestry Work


May, 2001
Sacramento, California— The California State Board of Forestry and Fire Protection will present its highest honor, the Francis H. Raymond Award to the Collins Pine Company on Tuesday, June 5, 2001 at 6:00 PM in Yreka’s Greenhorn Park.


January 17, 2001
The target market for specialty plywood is very depressed and there is no indication that will change in the foreseeable future.


January 2001
Collins believes that the US National Forests should be looked upon as providing both wilderness preserves and sustainable resources for the benefit of all.


November 8, 2000
The Collins Companies, the first privately-owned forest products business in the US to be certified by the Forest Stewardship Council (FSC), recently announced the winners of the International CollinsWood¬ Millennium awards.


November 1, 2000
On September 25, Collins Pine Company, in the northern Sierras of California, harvested a 126 year-old, 130-foot tall ponderosa pine, their 2 billionth board foot of timber.


April 13, 2000
The Better Business Bureau of Oregon and western Washington has awarded its Business Integrity Award for large companies to The Collins Companies of Portland.


April 3, 2000
The Collins Companies are pleased to announce that Eric Schooler is signing on as Executive Vice President.


August 31, 2000 Deadline
The Collins Companies are pleased to announce a call for entries for the CollinsWood® Millennium Awards.


We’re pleased to announce that the 75,000 acre Collins Lakeview Forest has recently been certified as a “Well-managed Forest.” 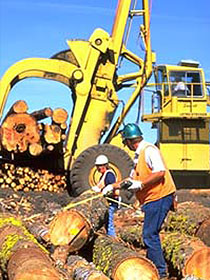